Hiroshima has been a center of trade and culture since the beginning of Japan's recorded history. Hiroshima is home to two UNESCO World Heritage sites: (1) the Atomic Dome in Hiroshima, one of the few remnants of prewar Hiroshima following the atomic bombing in 1945; (2) Itsukushima Shrine in Miyajima, famed for filling with water and appearing to “float” during high tide. Other attraction in Hiroshima includes Hiroshima Peace Memorial Park Museum, Hiroshima Castle, and Shukkei-en Japanese historic gardens. Other Scenic Sites in Hiroshima 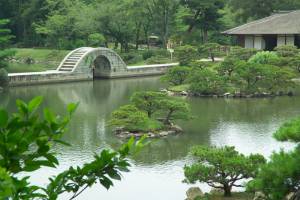